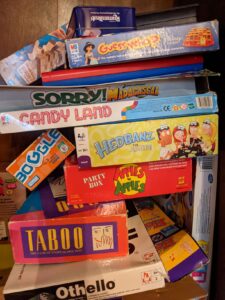 Some of the games in my house

Have you ever gone to the home of a friend or family member and had them pull out their favorite board game to play, but you have never heard of it?  You are at quite a disadvantage, not just from unfamiliarity with the rules, but also not knowing the strategies.  You are just ignorant of it.  That word doesn’t have to imply negative connotations.  It just means that you lack the knowledge and information about that particular game.

I thought of this when I was recently meeting with a prospect who had his insurance with the same insurance company for 35 years.  He was with an insurer where he used to have one agent he could speak to if he had questions.  But now when he needs service, he gets whatever customer service representative is next in the queue at the end of the toll-free number.  He came to me because he realized he should check to be sure his current insurer was giving him a good price.

As a professional, I made some recommendations about some areas where there were some shortcomings and omissions in his current coverage.  So when I presented a comparison proposal in a couple of our insurers that improved the level of protection and lowered his premium by 30%, he was incredulous.  He wanted to know how this can be.  Part of his concern can be chalked up to human nature.  Nobody wants to be told that they have been happily overpaying for something for years.  But he had been playing a different game.  He had never learned that there was a different way to handle insurance exposures.

As with most things insurance, the question of how insurers represented by an independent agent can provide better coverage at a lower price does not have a simple answer.  But there is one factor that is easy to understand.  And it has everything to do with catchy jingles, memorable tag lines, and funny characters.

The insurers that deal with independent insurance agents don’t have anywhere near the advertising budget spent by the direct writers of insurance.  You can probably quickly think of at least 3 different insurers that have funny commercials on TV right now.  I love the creativity in them!  Sometimes they are so funny you can’t even remember which insurer they are talking about.  But they all have one thing in common.  They cost a lot to make and show as often as they are shown.  That money has to come from somewhere.  Well, insurance companies get their money from the premium their insureds pay them.  So the larger their advertising budget, the more cost is passed along to consumers in higher rates.

The insurers that deal with independent insurance agents expect us to bring the customers to them.  We spend a lot of time making sure we are doing the right thing for our clients, so they will refer us to their friends and family. Our advertising is our good service.

Just because you haven’t seen a funny commercial from the insurer recommended by an independent agent, doesn’t mean they aren’t large and financially stable.  Every insurer we represent has at least a B+ financial stability rating by A.M. Best, which is an independent rating organization that analyzes the financial stability of insurance companies.  They will be around to pay claims.  If they weren’t going to be, we wouldn’t be doing business with them.

I would be remiss to allow this discussion to be solely focused on price.  Sure, that is a big factor in insurance and risk management.  But it is irresponsible to be focused solely on price at the expense of being properly insured.  We spend a lot of time in continuing education.  We understand insurance.  It’s what we do every day.  That means we know what losses you are most susceptible to and can advise you on what coverage you need and what coverage might not be as important for you to have.  Armed with that information, we can put together an insurance program for you that can have you properly insured with an insurer who will provide the service you are looking for at a price that can surprise you.

And all of that comes with an agent who will know your account.  When your policy is coming up for renewal, we will pay attention to see if the insurer has raised their rates.  If they have, we will look for another insurer on your behalf.  So before you even have to call to ask why your premium has gone up, we will have likely contacted you to let you know what the options are!

Now you know the rules of a game you may not have even know existed.  Don’t be afraid to play it!  It’s easier to win than you might have thought.

Are Lights Effective for Burglary Prevention? Inexpensive Fixes for a Safer Home